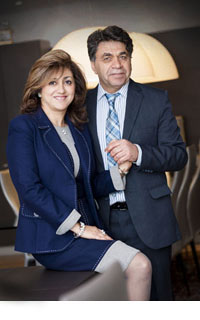 Arya and Ahmad Razavi took the decision in 1995 to create the CASPIAN TRADITION company. Based in Belgium since 1987, they both attended various academic institutions in Brussels.

The pair might have been expected to take up more highly specialised professions given their family backgrounds, particularly in the case of Ahmad where the expert knowledge required for certain sectors has been passed from father to son for over 40 years. The Iranian origins of the two entrepreneurs presumably enabled them to consolidate the contacts required in the very exclusive circle focused on the caviar trade.

With this in mind, Dr Ahmad Razavi personally visits the fish farms around the world several times a year to select his products, displaying the enthusiasm only to be expected from someone so proud of the services he provides.

The onsite selection is a key stage in the process for delivering top-rate products. The pair who grew up in this very closed circle can pride themselves on belonging to the small group of insiders who are answerable for such a secular tradition.

In its capacity as a producer and direct importer, CASPIAN TRADITION itself exports 90% of its caviar towards other European Union countriesas well as to other continents

Caspian Tradition SA very quickly grew in the world of caviar trade and won the trust of its gastronomic and international clients thanks to their Iranian expertise in this field.

Initially specialising in wild caviar alone, Caspian Tradition, decided in 1997 that it should heed market trends by branching out other species of sturgeons from other origins. It also started offering other fish egg specialities, such as salmon eggs, trout eggs from France, Denmark and Spain, and other delicacies, such as sea urchin gonads, King crab, foie gras, salmon and smoked sturgeon, saffron, truffles, etc.

In 2009, a shareholding started with with JIK GmbH in Düsseldorf, and in 2011, Caspian Tradition acquired La Maison du Caviar in Brussels, which is currently part of our team.

Extension of the laboratory

Takeover of the Company La Maison du Caviar in Brussels

Move to the new buildings